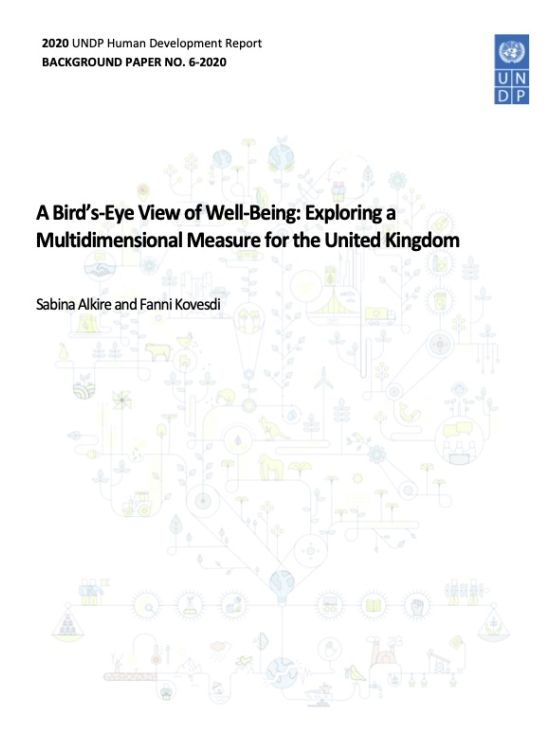 This paper explores a new approach to capturing well-being and human development in a single, joint multidimensional index that is at once intuitive, rigorous and policy salient. Based on Amartya Sen’s capability approach and the Alkire-Foster method as adapted in Bhutan’s Gross National Happiness Index, the paper presents a new exploratory Multidimensional Well-being Index (MWI) for the United Kingdom. The aim of the paper is twofold: Inform the debate on the measurement of well-being and of human development more generally, and illustrate the added value of a single rigorous metric in the form of an index as a complementary headline measure to gross domestic product (GDP). The MWI presented here follows a subset of the domains and indicators from the official national well-being dashboard for the United Kingdom and is constructed from a single wave of Understanding Society (Wave 9) data. Findings are presented at the national level and decomposed by population subgroups and regions to reveal inequalities in well-being across the population. The indicators are data constrained so we recommend the results be interpreted as illustrating a methodology that could be insightful for policy if appropriate indicators were agreed by due process. Results show that 44 percent of the population enjoys satisfactory levels of well- being, but this varies greatly. For instance, across ethnic groups, 53 percent of people from a White background enjoy favourable well-being, but that is the case for only 35 percent of people from all other ethnic groups combined and only 27 percent of persons who self-identify as being of a Black/African/Caribbean/Black British background. Many people report lacking a balanced diet and minimum physical exercise, as well as feeling unhappy, anxious and unsatisfied with income or leisure time. This highlights the need for policy focus on these areas if well-being is to be raised and maintained for all.