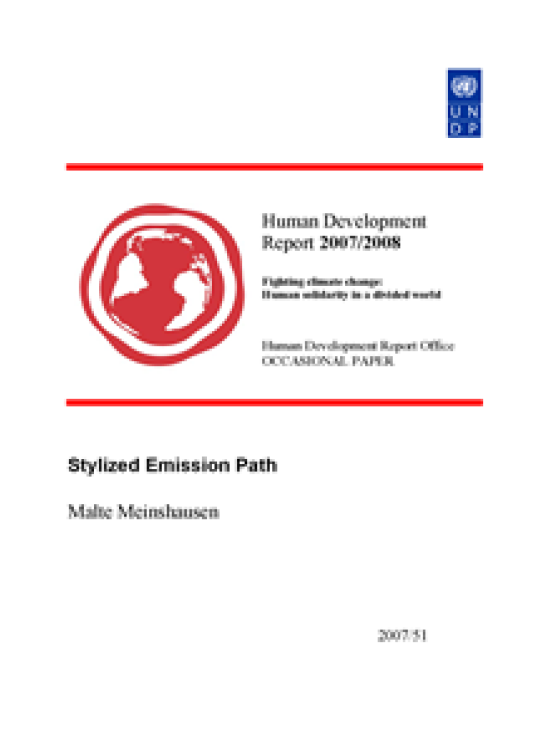 This background note provides details of a stylized greenhouse gas (GHG) emission path created in preparation of the UNDP Human Development Report 2007. Under this emission path, global greenhouse gas emissions are assumed to be halved by 2050 compared to their 1990 levels. ‘More likely than not’ (>50%) such an emission path would result in a global mean temperature increase above pre-industrial levels of less than 2°C. Such a temperature level is not a ‘safe level’ however. Ice sheet disintegration and rising sea levels, severe impacts on ecosystems, human health and food production can not be ruled out for temperature levels below 2°C. It is chosen here as a rough guideline for an emission pathway as 2°C is often considered as a policy target. Industrialized nations, i.e. the countries listed in Annex-I of the United Nations Framework Convention on Climate Change (UNFCCC), are assumed to reduce their emissions by 30% by 2020 and 80% by 2050 – relative to 1990 emission levels. Consequently, the remainder of the global emission budget is available for developing countries, i.e. Non-Annex I countries. Under this stylized emission path, non-Annex I GHG emissions are rising up to about 170% of their 1990 levels by 2020, before falling to about 85% of their 1990 levels by 2050. Two-thirds of the world’s 21st century carbon budget is hence assumed to stem from Non-Annex I countries under this stylized emission path. The climate response under this emission pathway is comparable to the medium pathway analyzed by the Stern Review, namely a temporary peaking of CO2equivalance concentrations (radiative forcing) at roughly 500ppm towards the middle of the century with a decline to 450ppm and below towards the end of this century. Using the simple climate model MAGICC as in IPCC AR-4, temperatures for most of the 19 AOGCM model emulations are projected to stay below 2°C although under high carbon cycle feedback settings, the upper temperature (1-sigma) uncertainty is 2.5°C above preindustrial.