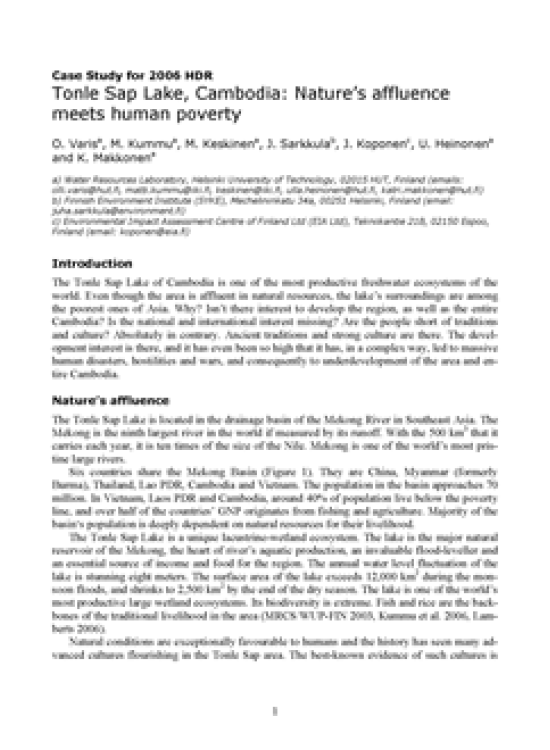 The Tonle Sap Lake of Cambodia is one of the most productive freshwater ecosystems of the world. Even though the area is affluent in natural resources, the lake’s surroundings are among the poorest ones of Asia. Why? Isn’t there interest to develop the region, as well as the entire Cambodia? Is the national and international interest missing? Are the people short of traditions and culture? Absolutely in contrary. Ancient traditions and strong culture are there. The devel-opment interest is there, and it has even been so high that it has, in a complex way, led to massive human disasters, hostilities and wars, and consequently to underdevelopment of the area and en-tire Cambodia. The Tonle Sap Lake is located in the drainage basin of the Mekong River in Southeast Asia. The Mekong is the ninth largest river in the world if measured by its runoff. With the 500 km3 that it carries each year, it is ten times of the size of the Nile. Mekong is one of the world’s most pris-tine large rivers. Six countries share the Mekong Basin (Figure 1). They are China, Myanmar (formerly Burma), Thailand, Lao PDR, Cambodia and Vietnam. The population in the basin approaches 70 million. In Vietnam, Laos PDR and Cambodia, around 40% of population live below the poverty line, and over half of the countries’ GNP originates from fishing and agriculture. Majority of the basin‘s population is deeply dependent on natural resources for their livelihood. The Tonle Sap Lake is a unique lacustrine-wetland ecosystem. The lake is the major natural reservoir of the Mekong, the heart of river’s aquatic production, an invaluable flood-leveller and an essential source of income and food for the region. The annual water level fluctuation of the lake is stunning eight meters. The surface area of the lake exceeds 12,000 km2 during the mon-soon floods, and shrinks to 2,500 km2 by the end of the dry season. The lake is one of the world’s most productive large wetland ecosystems. Its biodiversity is extreme. Fish and rice are the back-bones of the traditional livelihood in the area (MRCS/WUP-FIN 2003, Kummu et al. 2006, Lamberts 2006).